Last year, I pooled money with some friends to run fully-staked validator nodes on 3 different blockchains. We made 3x our investment and learned a lot. Here's the stuff I found interesting:

These networks weren’t designed explicitly to infuriate little node operators, but it can seem that way. This is a general problem with proof-of-stake blockchains:

Every proof-of-stake system has this randomness in the earnings. This makes it very frustrating to run 1 node, but doesn’t matter at all when running 100+ nodes. In other words, it’s only bad for the little guys.

Here is 1 month of earnings for my ETH validator... can you guess which 2 days I proposed a block? 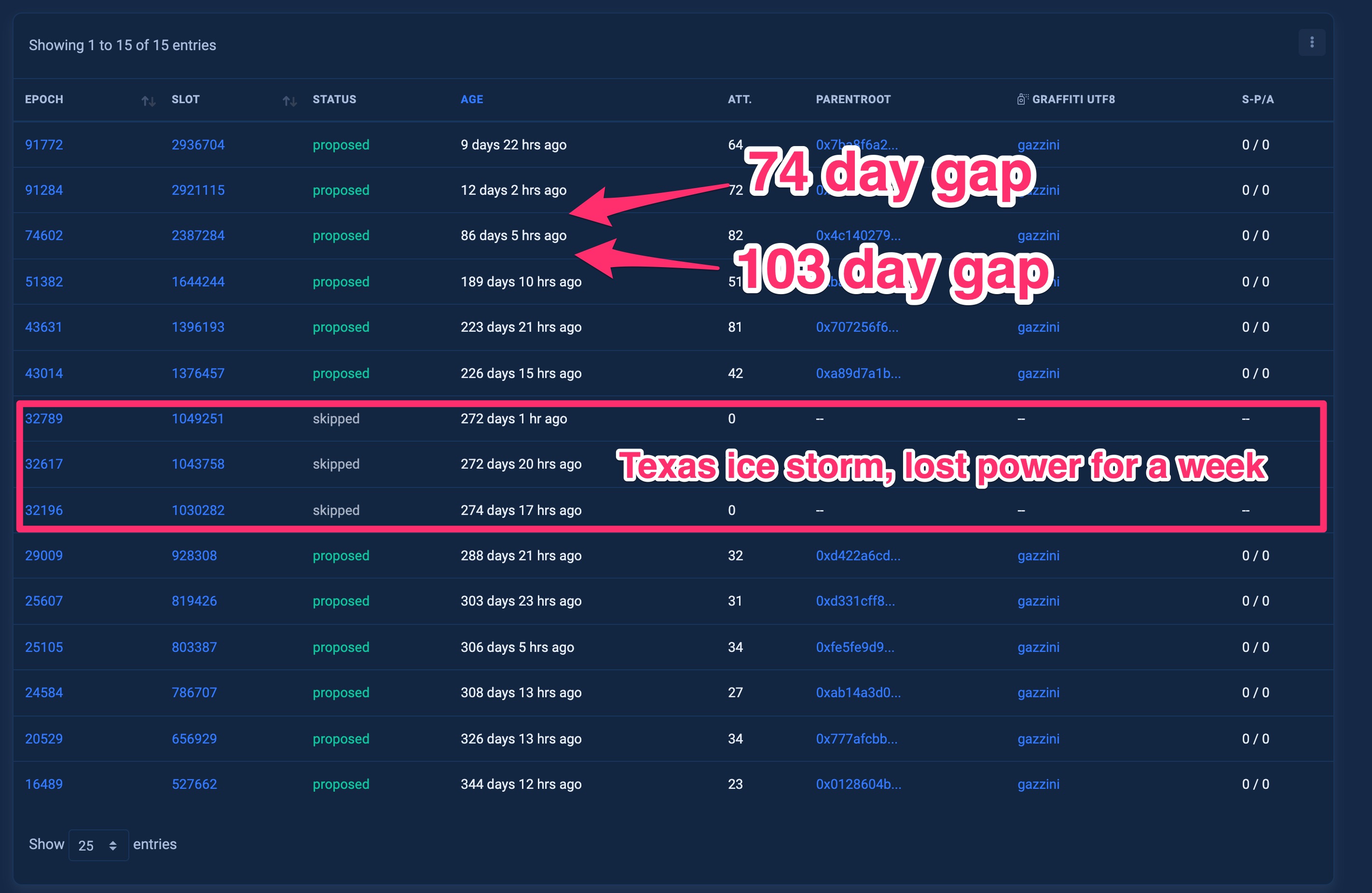 The opportunity to propose a block is pseudo-random (luck-of-the-draw). Sometimes, I went months without proposing a block. It’s really difficult to determine if I was just unlucky, or if I had misconfigured the validator in some subtle way.

A similar mechanism exists on the Helium network:

HNT validators only earn when they're in the "consensus group." Election to the consensus group is pseudo-random (luck-based), but then better performance helps you stay in longer.

Pocket has a similar phenomenon -- you stake your POKT & then wait for a "session" to come around. Several nodes are pseudo-randomly assigned to the session (luck), but then only the best nodes in that batch earn any tokens (performance, based on low latency).

This problem of rewards-consistency is common across proof-of-stake and proof-of-work systems, and the response is similar: pooling resources! Staking services & mining pools are very good for the ecosystem.

When staking ETH, the big services (Lido, Coinbase, etc) seemed fundamentally opposed to the core tenant of cryptocurrency: decentralization. In an effort to combat this, I decided to stake some ETH in the most “decentralized” way possible.

I bought an Intel NUC on NewEgg, a 4TB NVMe stick, 32GB of ram, a battery backup, and 2 separate fiber-optic internet providers. I installed Ubuntu, Geth for the ETH1 client, and Prysm for the ETH2 client. I then staked 32 ETH to this tiny box, tethering my financial future to a 35W machine in my son’s bedroom (I’ve since moved it to a friend’s house).

Here’s what I learned:

Why are staking services better?​

Why do startup founders use cloud providers to host their websites? Don’t they have perfectly good computers at home?

^^ If you don’t know the answer to that question, then we can’t be friends. Apparently I can’t be friends with myself, because I hosted my ETH validator at home riiiiiight before the big Texas winter storms last year, and we lost money because of it:

I had taken significant precautions, but my battery backup only lasts for 3 hours... and we lost power for a whole week. Yikes!

I spent a lot of time configuring linux boxes. But at the end of the day, I have other work to do, and I see diminishing returns on my efforts pretty quickly.

However, a giant staking service has a much stronger incentive to squeeze every last drop of performance out of their nodes, and in doing so, they make the network more performant.

These services aren’t strictly better in every way. They re-introduce some degree of centralization into the ecosystem, which has drawbacks:

Signals to look for​

Poof-of-stake solves a few problems, but it’s not a panacea for all economic woes. The rich still get richer, because they have more to stake (and therefore more to earn). However, because of long unstaking periods, this is actually an improvement on the proof-of-work systems. Large mining rigs can be shut down or sold (or converted to another blockchain) overnight, while it requires weeks (or months) of warning to withdraw any funds in a proof-of-stake system. It’s still possible for the whales to cut & run, but at least everyone else has some warning beforehand.

With these staking services, the network becomes less of a direct democracy and more of a democratic republic. Every holder doesn’t decide every issue, but rather they delegate to a node who they believe will provide maximum value. I wish there were more ways to encourage competition after an initial stake (something like election cycles, where you could transfer your stake to another provider but not sell it).

This experiment went very well financially, but for surprising reasons. The staking returns were meaningless compared to the token appreciation. Here’s the breakdown:

As it turns out, the vast majority of the staking ROI comes from an anti-feature: the long unstaking periods, which force everyone to (3,3). 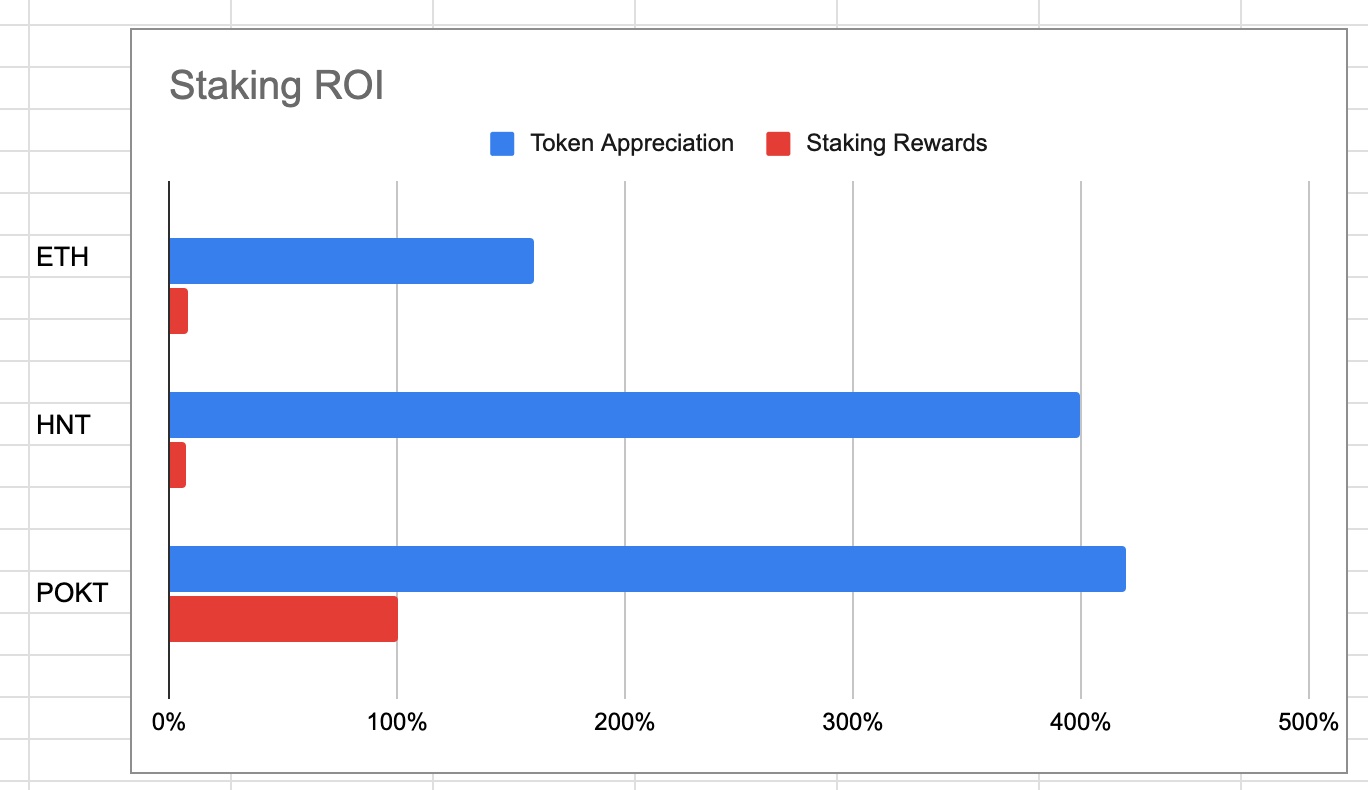 This forced HODLing was way more valuable than the staking rewards. I also got some hands-on knowledge of how the these different blockchains operate, and that visceral experience has helped me form better intuitions around cryptocurrency. I suspect that improved intuition will prove the most valuable in the long-run.

It's apparent that POKT staking is out-earning these other tokens, but it's not obvious how long this window of opportunity will last. I'm working on a project to help everyone, not just my friends, stake POKT. More on that soon.